The latest mockup of Apple iPhone 13 Pro Max has been showcased in a new video by popular YouTuber Unbox Therapy. In this video, we can see the device with a smaller notch. This is the highly anticipated inclusion in this year’s iPhones. With this squeezed notch, the earpiece placement has also been changed on the top bezel. The earpiece shifts from the centre of the notch. To recall in current series of models the earpiece comes in the centre of the notch at the top end. Additionally, the Face ID element shrinks to fit inside the smaller notch.

These are not the only changes in the upcoming iPhone 13 series. The video showcase that the iPhone 13 Pro Max could launch with bigger camera housing. Therefore, we can expect the smartphone to launch with larger camera sensor for much better photography. Additionally, the dummy unit is also coming with darker graphite color option. The color shade is darker than the current gen iPhone 12 Pro models. Also, the antenna band colors has been change. In the newer models, the antenna band color will come with the lighter shade as compared to current models with black color antenna band.

As mentioned above, the upcoming iPhone 13 lineup could launch in September. However, we have to wait for the official confirmation from the company. Also Read: iPhone 13 lineup leaks hints at mmWave 5G support outside the US 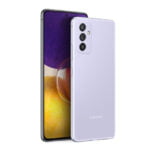