Samsung is working on a new budget segment smartphone. The upcoming smartphone from Samsung is likely to launch as a part of Galaxy A Series. The Galaxy A Series smartphone will be dubbed as Galaxy A22 5G. The leaks and rumors about this upcoming smartphone has been churning into rumor mills. According to latest leaks, reveals the possible design of the upcoming Samsung Galaxy A22 5G smartphone. As per leaks, the design of the smartphone could be different from recently launched Galaxy A72 and Galaxy A52. The possible design might different even from the Galaxy A32 and Galaxy A42.

Meanwhile, The details about the possible design of Samsung Galaxy A22 5G smartphone has been leak by popular leakster OnLeaks via Voice. The popular leakster share some of the images of the upcoming Galaxy A22 5G Smartphone. Also, These render images reveals the design of the Galaxy A22 5G smartphone. As per the images, the upcoming smartphone could feature a square-shaped rear camera setup. To recall, such camera module has been already seen on the current generation Google Pixel phone lineup.

Keep in mind, the Pixel phone lineup comes with a single rear camera setup. Whereas, according to render images, the Samsung phone has been seen with triple rear camera setup. In front, the smartphone could feature waterdrop notch display. The 5G smartphone will get some extra visible bezels on top and bottom of the display portion. Additionally, regarding connectivity, the smartphone will feature a USB Type-C port, a 3.5mm audio jack. For audio output, the device gets a speaker grill at the bottom end. According to reports, the Galaxy A22 5G Smartphone is likely to come with side-mounted fingerprint scanner. Also, The fingerprint scanner will be position within the power on/off button, as seen in the leaked render images.

The upcoming Samsung Galaxy A22 5G price is likely to fall under budget segment category. This is likely to be the most affordable 5G smartphone. Additionally, The device is likely to launch with a price tag under Rs 20000. Regarding its availability, the Samsung Galaxy A22 release date is set for June. There is no official confirmation about its availability. Also, we don’t know about when the Galaxy A22 5G Smartphone will launch in India. Also Read: Android 12 code leaks Google Pixel 5a 5G chipset details 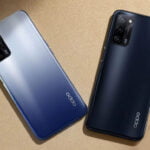